The pre-final version was submitted in mid October 2015 and was presented to DG MOVE during the Third User Workshop in December 2015.

The HIGH-TOOL pre-final version is an advanced beta version of the HIGH-TOOL model. It enables further user involvement and discussions on user requirements, but on the basis of a significantly advanced tool in terms of modelling methodologies, regional level and scope of policies covered, as opposed to the prototype version. The pre-final version also provides a basis for module developers to extend capabilities and enhance accuracy of modules and for software developers to optimise the whole system.

The pre-final version of the HIGH-TOOL model consists of seven thematic modules, a database, the user interface and the assessment module. The thematic modules are: Demography, Economy & Resources, Passenger Demand, Freight Demand, Vehicle Stock, Environment, and Safety. The structure is shown by the model's blueprint 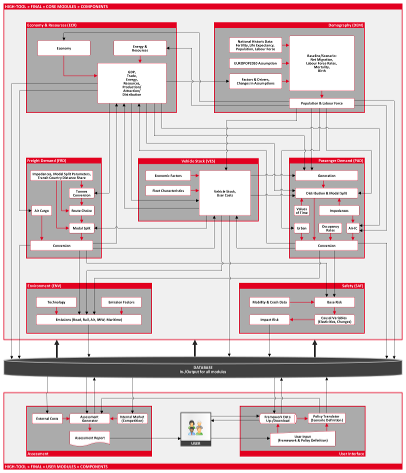 The prototype version is Java-based, and operates at the regional level of NUTS-2. This model version underwent an extensive validation and testing procedure.